Liverpool were held to a 2-2 draw by Shrewsbury Town on Sunday, forcing the Reds into a replay that manager Jurgen Klopp would ideally not have preferred to play. The German gaffer said after the match that U23 manager Neil Critchley, and not him, would be managing the return fixture at Anfield.

Dejan Lovren captained the side but the Croatian as well as Joel Matip, both playing for the senior team after a while, weren’t at their best. Also rusty was Fabinho, who was making his first start since November. Klopp made eleven changes to the side that had edged Wolves over the weekend, but was forced to bring Ox, Salah and Firmino off the bench in an attempt to force a result, albeit unsuccessfully.

Young Neco Williams was impressive for the Reds, who took a 2-0 lead before the home side fought back to level the game 2-2. It could’ve well been 3-2 in favour of the Shrews had Jason Cummings not missed a change to register a hat trick late in the game.

Here are the player ratings from local newspaper Liverpool Echo for the game. 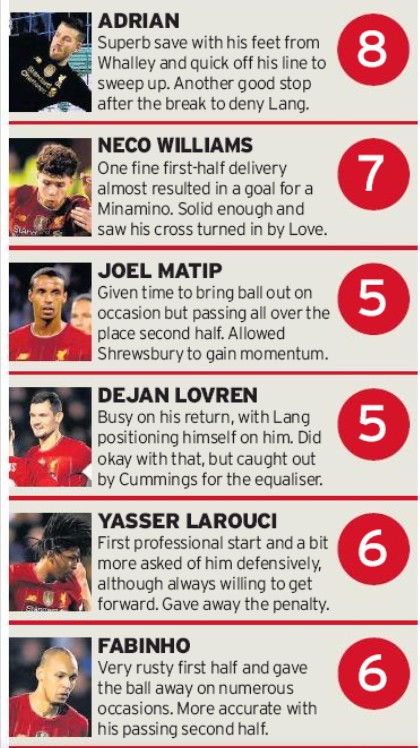 END_OF_DOCUMENT_TOKEN_TO_BE_REPLACED

Liverpool move into the quarterfinals of the FA Cup with a win over Selhurst Park against Crystal Palace on 14.02.2015. Fraizer Campbell put Palace ahead but Sturridge’s volley brought LFC on level terms, with Adam Lallana scoring the winner after Mario Balotelli’s original free kick was blocked. END_OF_DOCUMENT_TOKEN_TO_BE_REPLACED

LONDON – In what so far is still a disappointing campaign for Liverpool, the Spanish international Fernando Torres remains hopeful and believes that the club manager Rafa Benitez can still improve on last season.

The international striker refuses to be pessimistic and says the Reds already eliminated from UEFA Champions League and seventh league, rallied before the end of the national competition, where he hopes to finish between the top four.

Thompson talks about the possibility that Liverpool win the FA Cup

“I remember seeing the FA Cup final of 2006 when Liverpool was playing for West Ham, which was a great game. Pepe, Carra, Stevie and I have told all of the meeting,” said the player to the weekly magazine club LFC.

“In this country, the Cup is the most important trophy after the League. If you win, you play in the Community Shield. Winning gives you the chance to access more titles and that should always be our goal,” he said.

The player reiterated the desire of Liverpool finished the tournament in the top four. ”

“If we could, and we won the Cup, would be the best time in the last three or four years. I know that last year finished second in the Premiership, but to win something and finish in the top four would be even better,” he said.