Liverpool will enter the international break as league leaders after a hard fought 2-1 win over strugglers Fulham at Craven Cottage. With rivals Man City not in action as they were playing in the FA Cup, the Reds had a chance to go top of the league with a win in London, and did so thanks to a first half strike from Sadio Mane and a late penalty from James Milner.

Jurgen Klopp made two changes from the side that had secured a famous European triumph in midweek against Bayern. One was injury enforced in the form of Jordan Henderson, while the other saw James Milner drop to the bench, with Fabinho and Adam Lallana both coming into the XI.

Fulham caretaker boss Scott Parker made twice as many changes as his opposite number. In came Anguissa, Seri, Fosu-Mensah and Ayite and out went Odoi, McDonald, Sessegnon and Nordtveit. 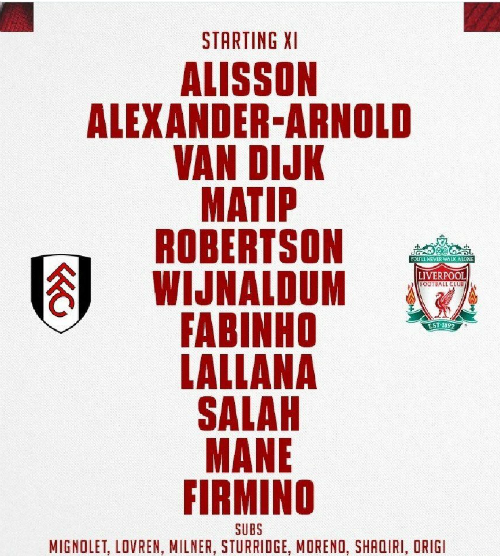 Sadio Mane was a key reason for Liverpool’s triumph in Munich and the Senegalese international continued his excellent form by netting the opener for the Reds. It came on 26 minutes after a nice exchange of passes with Roberto Firmino.

Liverpool weren’t at their best, and their inability to score a second goal meant that Fulham were always in with a chance. The Cottagers found a way back in the game through former LFC forward Ryan Babel in the 74th minute. Milner, who had just come on for Lallana, sliced his attempted clearance and poor communication between Virgil van Dijk and Alisson saw Babel swoop and complete the easiest of finishes.

Fulham were again their own worst enemies. Ten minutes from time, goalkeeper Sergio Rico unnecessarily held Mane back. There were several defenders present in the box to take care of the danger had the forward reached the ball, but Rico’s moment of madness saw Craig Pawson point to the spot. Milner made no mistake with the ensuing penalty, sending it down the middle as Rico dived in vain to his right.

While City do have a game in hand, this two point lead is an important one for Liverpool, who have shown signs of crumbling under pressure in the past. A look at the bookmakers on FreeBetsHub.com shows that the Reds are currently 2/1 to win the title, with City being quoted at 2/5.

Interestingly enough, City’s next opponents are Fulham. The Cottagers will be desperately targeting victory in that one- they’re thirteen points off safety with seven games to play. With their horrible goal difference (-41), it looks like a return straight back to the Championship for them, unless Parker can conjure some miracle in these final weeks.

Liverpool’s next game, after the international break, is a home one against Spurs.