Liverpool came from behind to edge a tough midweek clash against Newcastle United at St.James Park. The Reds scored the winner deep into stoppage time- the 98th minute, as they picked up three priceless points against the Magpies to go with the 3 that they had earned by thrashing Bournemouth 9-0 over the weekend.

Newcastle are the only team to have taken points off Man City this season (City, by the way, thrashed Forest 6-0 in the evening’s earlier fixture to heap more pressure on the Reds, whose game kicked off half an hour later). The Magpies made four changes to the side that had drawn 1-1 with Wolves over the weekend, with record signing Alexander Isak making his debut. Liverpool chose to stick with the same XI that had given them their first win of the season against the Cherries. 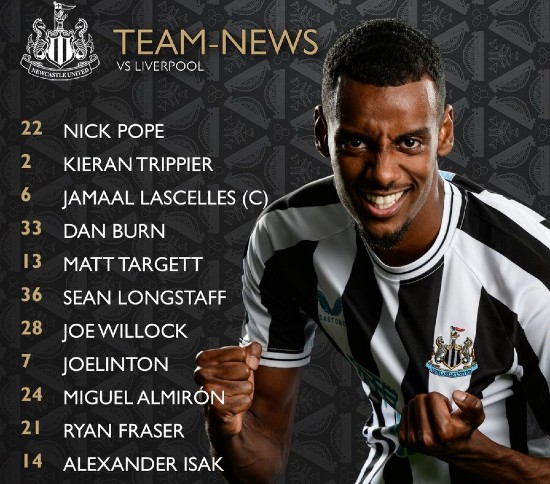 The first half was all Newcastle, and they took the lead in the 38th minute through Isak, with the lanky Swede producing a good finish after being set up by Sean Longstaff. He also netted a fine individual strike to put the Magpies 2-0 up in the 54th minute, only for that goal to be disallowed for offside.

It took Liverpool 60 minutes to register their first shot on target, and it came through youngster Harvey Elliott. That seemed to spark some life into them as just seconds later Roberto Firmino’s well placed shot from the edge of the box drew the Reds level.

Jurgen Klopp made a triple substitution ten minutes later, taking off both full backs in a move that saw James Milner come off the bench to play right back.

Newcastle though seemed content with the point they had earned and resorted to time wasting tactics, with Joelinton and Nick Pope among those indulging in them. However it backfired- the original five minutes that was scheduled for extra time got extended, and youngster Fabio Carvalho, introduced off the bench smashed home from a corner to leave the Magpies distraught.

With Diogo Jota back in training and Darwin Nunez serving the last of his three game ban, Liverpool look the stronger team going into this weekend’s clash against bitter rivals Everton. It therefore comes as no surprise that across the pond, the likes of PowerPlay Canada have Jurgen Klopp’s side as favourites for the Merseyside derby. After an indifferent start to the season, the twin wins over Bournemouth and Newcastle have taken the Reds to fifth in the table.

Their opponents this weekend, the Toffees, drew 1-1 with Leeds United in their last game. They are yet to win a league fixture this campaign, having drawn 2 and lost 3 so far.

The Reds were however dealt a blow when veteran Jordan Henderson picked up a hamstring issue in the Newcastle game, leaving their already-thin midfield even thinner. There has been talk of a deadline day move for a replacement, with Juventus’ Arthur Melo likely to arrive on loan at Anfield till the end of the season.