Former Liverpool star Dietmar Hamann was spotted at the Oval earlier today, watching the Australia v India Cricket World Cup game. England are currently hosting the 50 over World Cup, and are one of the favourites to lift the crown.

Germans aren’t known for their love of cricket, but Hamann developed a liking for it during his tenure at Anfield, with test cricket particularly getting him into the game. The 2005 Ashes, which caught the nation’s imagination like nothing else, made Didi a life-long cricket fan. 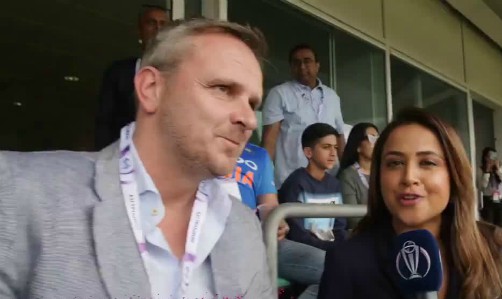 The Australia v India game saw the Asian side triumph by thirty six runs- their first ever group stage win over the Kangaroos in over three decades. As noted by the Cricket Blog, Australia perhaps lacked flexibility in their chase, opting to stick with their traditional batting order instead of promoting one of their power-hitters up the order. Hamann watched a century from India’s Shikhar Dhawan, and talked about his experience in this interview below. Riding on Dhawan’s fantastic 117, India scored 352/5 batting first and managed to restrict Australia to 316.

England have currently played three games. They started off with a fine win over South Africa at the Oval, but were upset in a high scoring game at Trent Bridge by Pakistan just days later. Eoin Morgan’s men recovered to thrash Bangladesh in their third fixture and remain well placed to at least reach the semis, if not go all the way.