Liverpool squandered a three goal lead, and a chance to book their spot in the last 16 of the Champions League at the end of MD5, as they walked away from Estadio Ramon Sanchez Pizjuan with a point following a 3-3 draw with Sevilla.

The Reds, who had lost on their last three visits to Spain, made two changes to the XI that had beaten Southampton 3-0 at Anfield over the weekend, with Lorius Karius replacing Simon Mignolet in goal and Joe Gomez coming in for Trent-Alexander Arnold at right back. 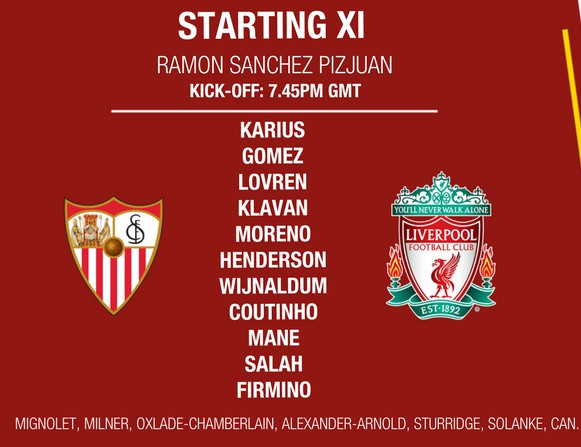 Jurgen Klopp’s men got off to the best possible start with Roberto Firmino putting them ahead after just two minutes. Philippe Coutinho’s corner was flicked on by Wijnaldum into the path of Firmino, who made no mistake at the far post.

Sevilla had two great opportunities in as many minutes to equalise but wasted both, with Nolito first denied by the post and Wissam Ben Yedder then shooting wide.

The Andalusians were then made to pay by Liverpool, with the Reds’ second goal almost a carbon copy of their first. Coutinho with the corner, Firmino this time with the flick on at the near post, and Sadio Mane slotted in at the far post. Minutes later, the Senegalese international turned provider for Firmino, who picked up his second as Liverpool raced to a 3-0 lead inside 30 minutes.

Sevilla coach Eduardo Berizzo, who had been recently diagnosed with prostate cancer, broke the news to his players at the interval, and Los Rojiblancos came out a different side after the interval. They were aided of course by some very ordinary defending, with Alberto Moreno in particular culpable.

The Reds left back, a former Sevilla player, first gave away a silly free kick, and then failed his defensive duties as Wissam Ben Yedder nodded home from the resulting set piece. On the hour mark, Moreno needlessly fouled Ben Yedder in the area, and the French international picked himself up and sent Karius the wrong way to make it 3-2. 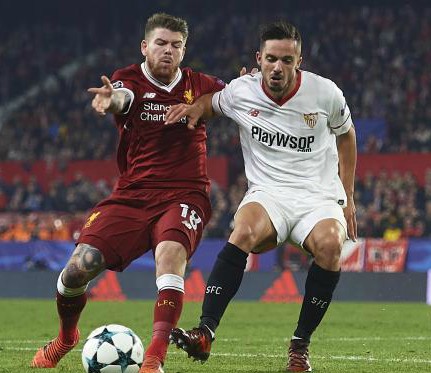 Henderson and Wijnaldum struggled to control things in the middle of the park for the visitors, and doing a Liverpool roundup after the game saw the same sentiments echoed by many a Reds fan- there’s serious need for reinforcements in midfield (defence is another story altogether!), and Naby Keita cannot arrive soon enough. Hendo completed only 55% of his passes and failed to win even a single tackle or header ALL game. Those numbers, from a club captain, are simply not acceptable at this level.

There was more pain to come for Liverpool though, with familiar defensive issues costing them again. A corner in second half stoppage time was tamely headed by Klavan into the middle of the penalty box, where Guido Pizarro gleefully accepted the gift and made it 3-3.

A win would’ve seen the Reds qualify for the Round of 16- instead they now have to wait for MD6. A draw in their final home game against Spartak will be enough to qualify (but perhaps not as group winners assuming Sevilla beat Maribor), and a loss will see them eliminated, with the Russians taking their spot owing to their superior head to head record.