Liverpool are fourth in the Premier League table at the moment, with 56 points from 29 matches: but will they remain in the Champions League places at the end of the season? Today, we’re hoping to answer just that, as we take a look at the Reds’ prospects for the remainder of the 2016-17 campaign.

If you look at the Reds’ record against big name opposition in the league this season, you’ll find it hard to believe that they’re not yet guaranteed a top four spot. They are undefeated against Chelsea, Man City, Man Utd, Arsenal and Spurs- the other members of the “big six”, the first time they’ve managed to do so since the 1995-96 season

Liverpool are a point behind third-placed Manchester City and three behind Tottenham, who are currently second in the standings. Jurgen Klopp’s side are also four points clear of fifth-placed Manchester United, who have played two fewer games.

With Spurs and City both having played a match fewer than the Reds, Liverpool could struggle to finish second, but clinching the third or the fourth spot is still possible for them. United and Arsenal are close behind, of course, which means that Klopp’s side cannot slip up and have to be fully focused. According to the Paddy Power odds, Liverpool are 2/5 to finish in the top four of the Premier League this season. While the odds are in favour of the Reds, the Anfield faithful will know that things can change in a matter of weeks. After all, not so long ago, Klopp’s side were touted as genuine Premier League title contenders.

The main problem with Liverpool at the moment is that they appear to be running out of time. Following a 1-0 victory over Manchester City at Anfield on New Year’s Eve, the Reds struggled to play well and pick up points in January and February. Draws with Sunderland, Man United and Chelsea and defeats to Swansea, Hull and Leicester saw them drop out of the title race.

Things have improved in recent weeks, though. The Reds won 2-0 against Tottenham at Anfield in February, and are unbeaten in their last three Premier League matches, which includes a 3-1 victory over Arsenal. Liverpool have a strong record against the top six teams in the English top flight, and the fans will expect them to pick up all three points against Everton in the Merseyside derby on April 1. 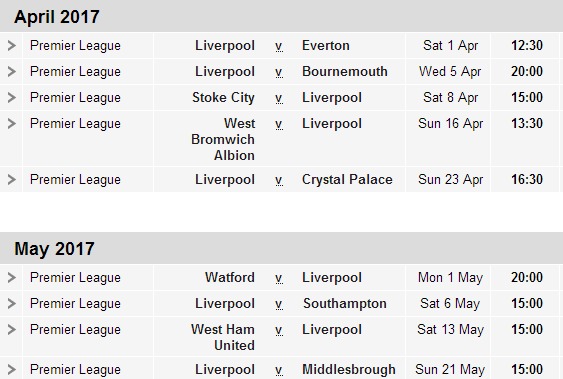 Looking ahead to Liverpool’s remaining games in the Premier League this season, it does appear that they have a favourable run-in. The Merseyside club should be able to bag maximum points against Bournemouth, Crystal Palace, Watford, Southampton and Middlesbrough – on paper at least.

Stoke City away from home is a tricky game and so is the encounter against West Brom at The Hawthorns. A draw with West Ham United at the London Stadium in May would not be a bad result, especially if the Reds are able to pick 15 to 17 points from their seven preceding matches.

The concern that many Liverpool fans will have is the team’s record against the so-called lesser sides – despite their sterling record against the top six, the Reds have lost three times against bottom-six teams. Perhaps winning against Palace, Watford and Middlesbrough will not be as straightforward as it should be.

The one advantage that Liverpool have is that they are out of all cup competitions. With only the Premier League to focus on, Klopp’s team can fully concentrate on finishing in the top four. Manchester United have Europa League commitments, while Arsenal are overwhelmed with concerns over manager Arsene Wenger’s future. Given the start that Liverpool made to the season, it would be a massive disappointment to the fans if they fail to end up in the top four.