Another two goals for the Arsenal midfielder put him clear of an under-par Sergio Aguero at the head of the leaderboard, while it was a tough week for goalkeeper Hugo Lloris

With fantasy football poster-boy Leighton Baines on the sidelines, Everton needed Bryan Oviedo (4) to step up and that he did. If the left-back’s performance against Stoke City is anything to go by, the Costa Rican could prove a cheap and effective cover in defence after his goal, assist and clean sheet made him the week’s highest point-scorer on 15. Prior to Saturday, he had accrued only one point in the whole season.

He was not the only bargain to excel in Gameweek 13. One of the surprises of the round was Hull City’s 3-1 win against Liverpool and the chief profiteer was midfielder David Meyler (4). Not only did he score the decisive goal but he also grabbed an assist – a solid 10 points from a man only selected by 0.03 per cent of managers. That figure may increase by next week.

Some of the familiar faces continued to rake in the points, of course. It is now getting to the stage where, if you do not have Aaron Ramsey (5.5) in your team, you should probably give up altogether.

Two goals against his old club, Cardiff City, extended his lead at the top of the season’s points table and his price is unbeatable value. As Goal correspondent Wayne Veysey writes, the Welshman is comfortably the best midfielder in the country right now.

His former team-mate, Samir Nasri (7.5) had an even more spectacular week for points as he snagged 13 with two goals against Swansea City. The Frenchman is becoming indispensable to Manuel Pellegrini.

Across the Manchester divide, meanwhile, Wayne Rooney (8.5) continues to do the business for United. The England international was everywhere against Tottenham and seized upon defensive errors to bag two game-saving goals, prolonging a fine streak of points-scoring that has taken him to joint-third alongside Olivier Giroud in the season’s totals. 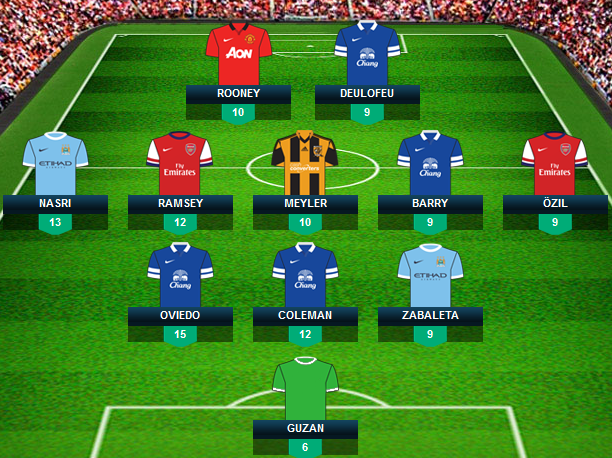 In a week of mixed fortunes for many of this season’s best fantasy football keepers, Tottenham’s Hugo Lloris (5.5) came off the worst. Though Spurs were largely good against United, his part in conceding a penalty knocked points off and, coupled with a booking, left him with -1 to show for the weekend.

On the opposite end of the pitch, the Red Devils’ defenders fared little better. Patrice Evra (6.5) has been his club’s highest-scoring defender this season but even he could only come away with zero for the match.

The fantasy game can be harsh, of course – particularly for defenders, who can handle themselves excellently for much of the game and still be hamstrung by troubles elsewhere along the back line. Such was the case for Luke Shaw (4.5), who had a fine match against Chelsea but Southampton’s three goals conceded stranded him on just one point.

There was frustration, meanwhile, for the division’s second-best points-scorer, Sergio Aguero (10.5). In such electric form of late, the Argentine just could not find an opening against Swansea and, with a yellow card to his name, came away letting down his value with a solitary point.

Some major injuries struck the fantasy football landscape this week and may prompt serious changes for many a manager.

Chief among the casualties is Liverpool striker Daniel Sturridge (8.5), who has blasted his way to 64 points so far this season but is set for six-to-eight weeks on the sidelines. For 27.24% of players, this means finding a new attacking spearhead.

Another popular choice, with 21.76% of bosses giving him the nod, Oscar (8) was withdrawn towards the end of the first half against Southampton due to a knock. The Brazilian had looked fatigued before then after playing a great deal of football this season and will likely be due a rest for the midweek fixtures.

Meanwhile, as the Saints conceded three goals in one game for the first time this season, Artur Boruc (4.5) had to be substituted in the second half before being sent to hospital for scans on his hand and wrist. The Pole has racked up 48 points to date but, depending on the severity of the injury, fantasy managers may have to turn to one of several other successful No.1s.

Sign up to Goal’s Premier League Fantasy Football competition for the chance to win monthly prizes. It is simple and fast to register and pick your team, so you can start competing against friends or colleagues for the ultimate bragging rights!